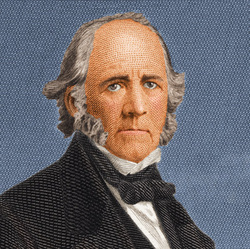 Sam Houston was born on March 2, 1793 in the Timber Ridge Church of Rockbridge County, Virginia. His death was on July 26, 1863. He spent most of his childhood in the state of Tennessee with the Cherokee Indian Tribe. Sam Houston shown the characteristic of adventurous.He became so fascinated in their customs and language. Also detesting his duties on the farm,  Sam Houston ran away from home to live with the Cherokee Indian Tribe. Learning the culture and customs of the Native American Tribe proved to play an important part later in his life.  This started his political life. During his life, Sam Houston became involved in the War of 1812. He had also became a private soldier in the United States' Army in 1813. He soon gained popularity and admiration among his men (soldiers) and the superiors of higher rank. On March 28, 1814, Sam Houston fought in the Battle of the Horseshoe Bend, where he served as a first lieutenant. Sam Houston  became with close contact to Andrew Jackson after serving with him during the battle with the Creek Indians. Afterwards in 1818, Sam Houston decided to study law.  Sam Houston was also a very fast learner. Sam Houston began practicing and studying law under Judge James Trimble. After only six months,  Sam Houston became a lawyer and soon later was elected for district attorney of Nashville, Tennessee in Oct. 1818. In 1823, Sam Houston was part of  the United States Representative. He served as from Ninth Tennessee District and also a member of the Congress. 1827, Sam Houston as officially elected the Governor of Tennessee at age 34. Sam Houston shown some characteristics of ambitious. On January 22, 1829, Sam Houston married Eliza Allen. However, the marriage was ill-fated and was soon ended. Effected by this depressing and dynamic change in life, Sam Houston resigned as Governor on April 16. He moved west towards the Indian Territory, across the Mississippi River. He revisited his Cherokee friends and continued the Native American customs and culture that he had learned in early years. Sam Houston soon began to get involved in Indian affairs. He was able to kept peace between the different tribes and help the Cherokee earn their citizenship. In Nov. 1829, Sam Houston married a Cherokee girl. Sam Houston also accomplished creating a residence and a trading post called Wigwam. Although with being involved in the Indian affairs, Sam Houston would constantly go Washington, D.C. to discuss business involving the Indian affairs. In 1832, Sam Houston moved to Mexican Texas and saw Texas as a "land of promises". Sam Houston soon became involved in Convention of 1833, when he became the delegate from Nacogdoches. He later became the commander of the chief of troops for the Department of Nacogdoches and began the "work of liberty." Then Houston served as a delegate of the Consultation of 1835 from Nacogdoches. In 1836, he was a commissioner for the provisional government and negotiated peace for the Cherokee Indians in the East Texas. Sam Houston also signed and adopted the Declaration of Independence. Two days about the Declaration of the Independence, Houston was assigned the job of major general of army to the convection. Sam Houston was also the commander or leader in the defeating Santa Anna's army in the Battle of San Jacinto. Texas gained the victory against Santa Anna's army and Houston soon became a Texan hero. Sam Houston was later elected Republic of Texas's first president.

Want to know more about Sam Houston? Check out these websites: 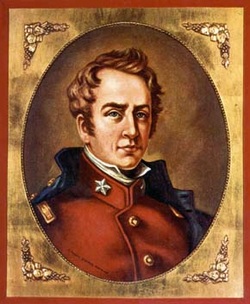 William Barret Travis was the commander of the Battle of the Alamo.  William was the first-born to Mark and Jemima Travis. He lived on Mine Creek near the Red Bank Community along with his 10 siblings. When he was young he was home schooled. In 1818 the family moved to Conecuh County, where they helped find the communities of Sparta and Evergreen. There Travis attended an academy and soaked in all the knowledge. After that he was enrolled in a school in Clairbone, Alabama by his uncle, the family patriarch, Alexander Travis. Later Travis became an apprentice of the leading attorney of Clairbone. Then he eventually became a an attorney himself. When he was 20 he married a Rosanna Cato, and they had a child on August 8, 1829, named Charles Edward Travis. Soon he accepted a position as adjutant of the Twenty-sixth Regiment, Eighth Brigade, Fourth Division, of the Alabama Militia. A year later he left his family and went to Texas. Since he arrived after the Law of April 6, 1830, he was an illegal immigrant. He obtained land from Stephen F. Austin and learned Spanish to become the attorney. He traveled the country doing the  legal work with a group of people who opposed the April 6,  1830 Law. This group was eventually known as the War Party. There was a clash at Anahuac, where Travis was mistaken as a perpetrator of a prank. The prank he was though to have pulled was passing note to a sentry of Bradburn, who was harboring runaway slaves. William M. Logan of Louisiana found out that he was harboring slaves and threatened to attack Anahuac if he didn't turn them in. The note that was thought to be passed to the sentry by Travis said that Logan returned with a large force. Bradburn arrested Travis, but this lead to many people revolting to let him out. Then when he kept refusing, John Austin travelled to Velasco to force Bradburn to let Travis free. When Jose de las Piedras, commander at Nacoghdoches, heard of this he rushed to Anahuac to help Bradburn. But he sooned realized they were outnumbered and convinced Bradburn to let William B. Travis free. Travis then moved to San Jacinto in 1834 where he was elected as secretary to the local ayuntamiento and was accepted into the councils of government. Travis became rapidly involved in the Texas Revolution and in June 1835, William left to Anahuac with 25 men to dispel Capt. Antonio Tenorio's military garrison. He then He served as a scout in a cavalry unit commanded by Randal Jones, and then commanded a unit himself. In late December 1835 William B. Travis was promoted to lieutenant colonel and in January 1836 he led a troop of 100 men to reinforce Col. James C. Neill. Unfortunately Colonel Neil left and left Travis in charge. Then James Bwoie arrieved with a hundred troops and they quarelled over leadership. They agreed on on an uneasy joint leadership until Bowie fell sick. He prepared the Alamo for battle by mounting the cannons, strengthening the walls and storing provisions inside. Since they knew they were outnumbered Travis wrote a letter addressed "To the People of Texas and All Americans in the World" on February 24th, 1836. Lots of support did arrive, but not in time, and on March 6, 1836 Santa Anna attacked and the Alamo was overtaken in a matter of hours. Travis died early in the battle from a bullet to the head, but he died as a hero. 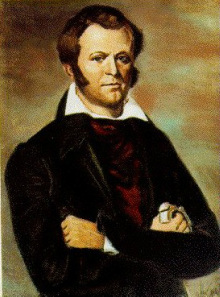 James Bowie was born on April 10, 1796 near Terrapin Creek near Logan County, Kentucky.  He spent his childhood in Missouri and Louisiana. When James Bowie was in his teens, he soon worked in Avoyelles and Rapides parishes. This is lumber was floated. He was also involved in investing and trading in his early years. James Bowie joined the War of 1812. However, the war ended when he going on his way to join Andrew Jackson's forces. Later, James Bowie became involving with the selling and trading of slaves. James Bowie was later engaged to Cecelia Wells, yet the wedding was later canceled to her death. James Bowie also had some enemies throughout his life. For instance, Norris Wright, Rapides parish sheriff and local banker, became a major enemy and played a important part of finding the 'Bowie Knife'. The 'Bowie Knife' was given to Bowie by his brother.  After leaving Louisiana, Bowie came to Texas. However, the exact time that he entered was unknown. Bowie later presented a letter of introduction to Stephen F. Austin from Thomas F. McKinney.  Bowie  was also scheming  the Mexicans by urging them to purchasing the eleven-league grants. However, Bowie soon irritated Stephen F. Austin when he became too involved in land and tried to encourage speculation and locating of land. Bowie became a man of wealth and later became a Mexican citizen. He later settled in San Antonio and married Ursula de Veramendi, whose family deeply sponsored and supported James Bowie.  Bowie also got permission from the Mexican Government to expedite the Indian territory. However soon later, a large Indian war party was following Bowie's group, killing many.  James Bowie was later given the title of "colonel".
Bowie was sought out by William B. Travis, leader of the War Part in Texas and asked to join forces. He was sent to tour Indian villages to find support there. He returned and reported that the Indians were "drunk and unwilling to cooperate".  After Santa Anna came to full power, Stephen F. Austin called for arms. Bowie brought men from Louisiana and was placed on staff as a colonel. Bowie was called a natural leader by his colleagues and died in battle at the Alamo.

Stephen F. Austin was possibly the most significant figure in the Texas Revolution. Born in Southwestern Virginia on November 3, 1798 he was considered one of the most important Founding Fathers of Texas. Though he was born in Virginia, they moved to Missouri in 1998 where he was raised.  There, Stephen grew to the age of ten, when Moses Austin, his father, sent him to a school in Connecticut and returned later on to spend two years at Transylvania University in Lexington, Kentucky. In 1813 he was elected to the territorial Legislature of Missouri, and was reelected to that position each year until 1819 at the age of 21. Moses fell ill and died in 1821 with his final wish for Stephen to complete his settlement project. In 1833, Austin went to Mexico to clear up some business with the Mexican Federal government. He brought new demands from the Texas Settlers. During that time he had sent some letters back home about Texans who wanted to be separated from Mexico, but while returning back to Texas, he was arrested and thrown into a dungeon for a year and a half. He was never tried or formally charged with anything. Released in August of 1835, Austin had returned to Texas a changed man. His previous loyalty to Mexico had been lost in prison, and he realized Mexico would never grant the wishes and rights his people desired. By the time he returned in late 1835, it was clear that Texas was on a path destined for conflict with Mexico, and it was obvious when Austin chose Texas over Mexico. After the first battle and the start of the Texas Revolution, the Battle of Gonzales, Austin was named commander of all Texan military forces, along with James Bowie and James Fannin. They had marched to San Antonio, where Bowie and Fannin had won the Battle of Concepcion. Austin then returned to San Felipe, where there were delegates from all over Texas were meeting to determine its fate. At the convention, Austin's position as military commander was replaced by Sam Houston. Austin was in favor of this change, for his brief time as a General had proven he was no military man. So instead, he was given a job more suited to his political abilities: He would be an envoy to the United States of America, where he would seek official recognition if Texas declared independence to see important tasks during that time. In April 21, 1836, Texas had effectively gained Independence from Mexico at the Battle of San Jacinto. When he returned not long after, he lost an election to be the first President of the Republic of Texas to Sam Houston, who appointed Austin the Secretary of State. Austin fell ill of pneumonia and died on December 27, 1836.